Another alpha, hopefully the last one before I do a final 3.0 release. As with beta 5, you need to manually download and update if you're running beta 4 or earlier. Using Sparkle to update from beta 5 should work smoothly.

The big new feature is a completely redesigned log viewer. The interface has been modernized and two new modes to browse logs have been added. In addition to just viewing the raw transcript, the log viewer will pull out the images and links that were in the conversation, making it easier to find a particular image or link you're looking for. 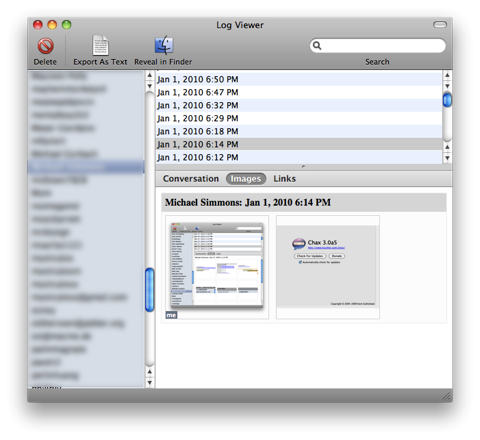 Also back after a couple year hiatus is auto-reconnect. It works for me in simulated tests, but I'd like to hear how it works for people who have continual connection problems.

If you're still having any problems, please keep reporting them and I'll see what I can do. One issue that I am aware of that still hasn't been resolved is the activity log and Growl notifications for status changes not appearing.

Love the new log viewer. One thing thats always bugged me but I'm guessing you never noticed is related to Jabber contacts. When I first load the Log Viewer it will show them all fine. However one it finishes loading in the status bar. It will change all of the jabber contacts to their email address'. Whereas everything else lists their First/Last or Nickname. Think you could poke around and see if there is anything stopping it from reading the vcards for Jabber contacts.

My buddy list becomes blank shortly after launch on Alpha 6. Tried uninstalling and reinstalling, no change. Reverted back to Alpha 5, and all is well. Thanks for your hard work! I can't imagine using iChat without Chax.

Same as @cutstain ... window goes blank after launching for about 2 seconds.

Upon sparkle installation, Chax no longer worked. I had to download and reinstall, but it's worked since then.

Seconding Sam, the Sparkle install resulted in a non-working Chax. Manual install is fine, though.

I had the empty contacts window problem too after installing from the manual download (since the Sparkle one didn't work). I found that toggling the Use Groups setting in the View menu made it go back to normal.

Alpha 5 would not permit sound to transmit when video chatting... have not yet tried Alpha 6 here is hoping

Sparkle install failed. Manual install works. Something to do with the updating of ChaxHelperApp, I believe.

Sparkle update seemed to work fine for me. I did notice after the update though that I got a message from AOL System Message saying that my screenname was already signed in to another location â€¦ even though I'm using the hidden preference to suppress that. And it worked fine in a5.

Okay, nevermind. I guess Sparkle didn't work and I was just too dumb to realize Chax wasn't running :)

same contact disappearing thing, but the trick someone mentioned of toggling groups does the trick to fix it!

Prompted me to install, I did and it did not work. I came here and downloaded it directly from here and it still didn't work until I hit the reinstall button. Now, the buddy list comes out blank. :(

My buddy list becomes blank shortly after launch on Alpha 6. How can i resolve this. I need the new functionality of chax. :(

A temporary fix for the blank buddy list is toggling groups on and off, as someone mentioned. I'll try and get this fixed as soon as possible.

What about HTML in ICQ?

toggling groups?would you describe it?

Yes, works the same smooth way b5 did, but the HTML ICQ bug is still my major problem.

Works, thanks a lot! I love the reconnect feature!

Come on, fix the HTML plz! I was forced to remove Chax because of that. Try sending HTML to a nonâ€“technical contact and they'll just tell you that text is garbled.

The toggling of "Use Groups" didn't seem to fix my empty contacts list :-( I'll try it a few more times!

I used sparkle to update from A5 to A6 and Chax wouldn't launch. I removed it and used the installer which seemed to work, but the contacts list is blank.

Thanks a lot for making Chax, I used it for years. My question is can Chax fix this annoying bug in iChat (Snow Leopard)?: http://discussions.apple.com/message.jspa?messageID=10098931 Is there any workaround? Thanks a lot. Regards, Zhen

Alpha issues: I used sparkle to update from a5 to a6. Updater launched and claimed to update chax, but when opening iChat I did not have chax available. a5 installer was unable to install chax at that point. Downloaded a6 installer manually and installed chax. Successful. 2 or 3 seconds after launch, my contacts window went blank and no longer showed any buddies. Selecting View->Use Groups brought my buddies back in my Contacts list. I am running 10.6.2 Build 10C540 on a 2.53 GHz Core 2 Duo MacBook Pro w/ 4GB RAM. iChat is version 5.0.1 Build 743 I have 2 active accounts in iChat. 1 MobileMe and 1 AIM. Thank you for your work on Chax.

Great summary by Beth, just another 'me too!' comment. I had the exact same experience.

I will not go with 3.0a4 on 3.0a6 yet to fix the problem with the code HTML, for me it is very important. Developers fix this problem please! please

Is autohiding of the contacts lists when iChat loses focus going to be reappearing in the final version of Chax 3? Is this possible in Snow Leopard? It's a subtle thing, but I really don't like having the giant contacts list open when I'm not in iChat.

same experience as Sam, Imaria, etc.; downloaded, manually removed and reinstalled and now all appears to be well (meaning that when i launch iChat i get a Contacts window instead of an AIM Buddy List - i haven't tested deeper than that yet). thanks for this great...app/add-on/thingy (whatever it is).

oh, and it sounds like Beth lost all her contacts from her contacts window even after manually installing a6; i'm happy to say that hasn't happened to me (yet...knock wood). i've even gone offline and back online using the menu bar icon to make sure my contacts came back when i went back online, and they did. so i'm good so far. i almost never video chat so i have no experience with the sound cutting out (or not).

Thanks @David Shepherdson! Toggle "Use Groups" fixed the contacts display for me, too! :)

Toggling "Use Groups" seems to fix the contacts display, but only temporarily. If you leave "Use Groups" on, the next time you restart, the issue comes back. However turning the feature off seems like an okay fix for those of us that only have one group. Thanks for the hard work Kent!

What about HTML in ICQ? Fix this problem please!

Same problem as some others. After connecting, the aggregated buddy list goes "blank" after a couple seconds. Restarting does not fix.

still HTML problems :( not funny switching back to alpha 4

I have the same problem with install via sparkle. Installed via download package and Chax worked. 2nd issue is the blank "All Contacts" list. Thanks for all your hard work!

I'm still having the problem with a6, as I did with a5, where after installation, launching iChat instead launched the Chax installer even if I remove and install, or reinstall Chax. This makes iChat unusable without reverting back to a4. Can anyone provide any ideas about why this is happening and how to fix it? Thank you.

@Tom Says: did you put the original ichat.app to another folder? had the same problem here. put it back to the applications-folder.

Thanks for your continued work on Chax, it's greatly appreciated. Here's to getting Growl notifications working (my favourite feature), and fixes for these bugs!

Am I just not seeing the Unified Contact Lists as an option or was that functionality removed in this version? I miss it! I need it! lol

Hey, I love the work you are doing. But I have a bug to report. My contacts appear briefly and then disappear completely. I tried reinstalling several times but I keep having the same problem.

Hey, same for me as Chris said. Sadly I cannot use chax anymore since 3.0a6â€¦

Chris and Dave as it's been stated multiple times just toggle off/on use groups. Problem will fix. Slightly annoying that each time I launch iChat I have to do this though.

I, too, had to resort to a manual download/install to get from 3.0a5 to a6. For me, all seems to be OK except that the "Add a Buddy" ("+") button doesn't do anything in the combined Contacts window.

I just want to confirm needing to manually install a6. After I downloaded the installer and the Updater opened up, it asked if I wanted to remove or reinstall. I clicked

(Sorry for the double post. Errant clicks.) I just want to confirm needing to manually install a6. After I downloaded the installer and the Updater opened up, it asked if I wanted to remove or reinstall. I clicked reinstall and it asked me where ChaxHelperApp was. Couldn't find it so I canceled. It gave me a success message and on restarting iChat I had Chax back. I also had the blank combined buddy list problem, and hiding/unhiding Groups fixed that issue. This is on 10.6.2 build 10C540, 2.16 GHz C2D, 2 GB RAM. Thanks for all your work. You make iChat usable!

If your contact list disappears immediately after opening, just try, from the combined buddy list window, going "offline" then immediately back online again. Worked for me.

Have donated you a few bucks. PleasÑƒ fix this fucking html for aim. Thanks =)

Now donated you a few bucks. PleasÑƒ fix this fucking html for client qip and other non-official.It's very-very serios for me.

My buddy list becomes blank shortly after launch on Alpha 6. Tried uninstalling and reinstalling, no change.

David, have you read the comments made before you commented?

Thank you for making this great iChat extension! Since alpha 5+6 worked fine for me, I think it's time for some feature requests ;) 1.) Thanks to the new "When quit iChat, set my status to Offline" option in SL (which I have turned off), I don't have to keep iChat running after I finished a conversation, I just press Apple-Q and iChat disappears into the Menu Bar. I looove this new feature, there is just one disadvantage: When running in the Menu Bar, iChat doesn't automatically switch my status to "Away" after the time, I specified in the "Secrets" PrefPane or in the PList. Could you please add this feature in Chax? 2.) is a feature known from Adium and other Jabber Clients: The possibility to set different Jabber Priorities for the "Available" and "Away" Status. This is a great feature in cooperation with an iPhone/iPod touch Jabber Client: I can set the Available-Priority higher and the Away-Priority lower than the Priority on my iPhone/iPod touch that when I'm "Available" on my Mac I get my messages there and when I'm "Away" from my Mac I get my messages on my iPhone/iPod touch. I'd be very happy if you could add these two features (I know, they aren't easy ones), but they would help me a lot! Thank you!

There is still the icq html-bug - Can you fix it? That is my primary reason, why I use chax - Thanks :)

In Alpha 6, it seems that auto-accepted file transfers is not working.

I installed Chax A6 and had the blank contact window too. I disconnected and reconnected one of my accounts (mobileme - I have a few gmail accounts always running in iChat) and when the mobileme buddy list loaded, the problem went away for all my accounts. Hope that helps.