The latest beta of Warp includes a couple minor bug fixes as well as a new floating pager that gives you constant access to your spaces. The pager shows you a live preview of each space; clicking on another space will switch to it. Visibility of the pager can be toggled with a hot key. 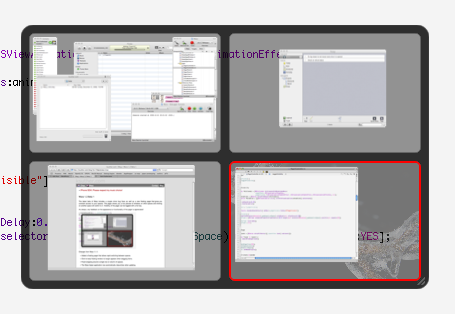 Awesome additions to warp! I'm a big fan and a long time adopter of this great enhancement to spaces. Thanks so much for your work and effort!

How about an option for never showing the floating window, even when I have "Click screen edge to Warp" set? I don't need an image of the screen I'm gonna warp to, it just wastes my time. But I do like the click to warp so I don't accidentally warp. Thanks for great software!

since this update, ive noticed warp using a ton of memory. about 384mb after 4-5 hours of use. jussayin

PLEASE PLEASE PLEASE 8) : add the ability to have more than 4 spaces in one row, I use mouse touch left and right borders to switch, but there is no way I can go from space 4 to space 5 . Add this and I'll buy! thx and Merry Christmas!

I just discovered warp (through news in "fscklog.com") - and i'm wowed! Awesome app! I always wanted to switch screens by touching the edge of my desktop. Thanks for this great piece of software!

could you please add the option to have the floating spaces windows follow the mouse. it'd be so useful to not have to travel to the floater. or another option could be to use the arrow keys + enter to choose the space. that'd be awesome. thanks for the useful software.

This beta seems to have a memory leak on my iMac as well (2.4 ghz intel, OS 10.5.6). I second Pogo's request to be able to click to warp without showing the preview. The floater is very nice, especially since it is resizable to whatever size you want. Thanks for the nice software!

Warp is really awesome. Only thing I really really ask for (please) is some kind of functionality when using normal warp without the standard modifiers that would allow me to hold down the Command or Option key to disable warp when I want to access my dock or menu bar. I don't use the Dock/Menu Bar often enough that I need to enable "Don't warp on edges with menu bar or dock", but when I do need to use it such a modifier would be helpful! I prefer to just have the screen glide between spaces with the mouse, but I'm forced to use a permanent modifier right now because unless I use only horizontal spaces, I'm left without access! Thanks, and great work! Looking forward to future releases.

The new (beta) is really nice, good work. Although there is a problem with the "Warp HUD" when using multiple displays. The problem is the following: I have a MB Pro and connect it to a 19" TFT at home there I am able to show/hide the HUD. However as soon as I disconnect the external screen the HUD will not appear, no matter how long I wait or how often I use the shortcut. My guess is the HUD appears on the secondary screen, which is not connected.

One problem I have before and also in this beta is about how warp switches spaces based on time delay. Currently it seems like when you hold the hotkey and move to the edge of the screen it starts the timer, and if the cursor is there at the end of the timer it switches spaces even if the cursor has moved away in the meantime. If possible I think it would be better if the timer were cancelled if the cursor moves away from the edge of the screen. I tend to accidentally switch spaces when using a browser because I use command for opening bookmarks in new tabs

It is probably too much to include in 1.2, but I have a feature suggestion for a future version: an option to trigger Warp to switch spaces if the mouse slides across the length of a side of the screen. For example, to move one space to the right, I could put my mouse into the top right corner (by the Spotlight menu) and then slide it down to the bottom right corner. Traversing the height of the screen like that (or better, about 80% or so of it, to give leeway for human inaccuracy) would cause Warp to do its magic. This would have much of the benefit of the Click to Warp option, in that it avoids having to hold down a modifier, but also without the problem Click to Warp can have when dealing with the menu bar and Dock. I got this idea from the method employed by the blackbox window manager for Linux.

Hi Kent! I have to admit I've missed the 1.2 beta in December. I'm really pleased about the pager - the most missing thing for me ever (I can't understand why Apple doesn't offer a pager for Spaces). But now that I finally found the tool which I was looking for so long there are some wishes: The first one is a design thing: I love the pager, but the borders seem to be too large. I'm using it with the smallest possible size and while the borders are not scaled like the window content itself they look very thick. The next wish: Yes, I definitely need the pager - but I'm not interested in the application's content which is placed at a specific desktop (for me it's more: "where the heck did I place Firefox?"). It would be a great possibility when there would be a choice within the options of Warp to select between either the content of the application or simply the application's icon to be shown. Means: the single windows of an application should be shown with their correct dimensions (as actually) - but instead of the content there should be the application's icon. That would be perfect. And one last wish to the pager which might be the most complicated one: it would be simply perfect if I could drag a single application from a pager window to another desktop on the pager. The same function Apple is offering when you decide to preview all screens at once. I compare Warp with Codeteks Virtual Desktops pro (which I've been using for years and still miss it on Intel Macs) and that three things mentioned above would make Warp the perfect replacement for CDTV. Definitely worth to pay some money for :-) But even if it would not be possible to realize this features Warp is simply a wonderful nice tool - especially since 1.2b1!

So, some issues: - I have a 2 screen setup (10.5.6) and the minipager displays by default on the secondary display (the display without the menubar). Not a bug, per se, but unexpected. - This beta when I installed it camped the "w" key by default. I had no hotkey set for the HUD, but with Warp beta installed, it ate all keypresses of 'w'. I installed over 1.1.1, logged out, and logged back in. Whenever I would type 'w' the minipager would display, so I assume it grabbed that as the hotkey somehow. I didn't try setting a new hotkey, since I don't want the minipager (and I notice there is no way to not display it). FWIW. Like the app in general, but 1.1.1 with the drag switching screens bug and 1.2 beta eating all my 'w' keys kind of makes it problematical to use. Look forward to future developments, though!

Hello. I'm in love with Warp, because a lot of the times I get really lazy when browsing, and can't be arsed to use the keyboard at all. The click to warp feature is great for me, but it gets annoying at times, especially with the dock and menubar. If there's an option to remove the preview from the edge warp, it'd be so much better. Additionally, a right-click to warp would be better as well, because I often warp when I want to access something on my dock. Thank you for your efforts. PS: I know my grammar sucks now. It's late and I'm tired, so please don't mind it :P

Kent, Thanks a lot for making this great preference pane! Especially the addition of the pager is extremely appreciated. I have my dock displayed without the glass effect at the bottom and glued to the left border of the screen, leaving some space at the bottom right. If it were possible to put the Warp pager next to the Dock and in the same look as the dock, that would be the perfect setup. The advantage of this is that application windows respect the dock when they are resizing, hence the Warp pager would not get into the way of any windows. As mentioned by Philipp, currently, the borders of the pager are much too thick when its size is really small. When switching desktops by moving the mouse to the screen's border, the preview of the desktop looks nice, but from a usability point of view, it does not add anything useful I'm afraid. What should it tell me? If it is the right desktop, then I click to switch to it. If it is the wrong one, it does not help me to find the right one at all. What would be more useful is the pager appearing when one hits the screen borders, with the "next" desktop being the default one to click on. Coming from Linux, I also second the other requests by Philipp and the one by Jon Stovell. Thanks a lot, and looking forward to the next Beta/Final version! Sam

I have been looking for a desktop pager for spaces since the feature was first introduced, this is awesome! I'm actually now using spaces for the first time, now that I have this great program. Is there actually any way to turn off the ability to change spaces by moving the mouse to the side of the screen? I really *only* want the pager. Also, if there is any posssible way you could add a preference to turn off the spaces animation, that would be great. Thanks!

Hi, I greatly appreciate your little program! It's easy, works and is just very innovative! Apple should've built this in from the beginning. However, I am working on a Late 2007 Macbook with 10.5.8 and it seems as though your application does have some kind of a memory leak. It uses more than 350mb of memory and when I kill the deamon it keeps going back up as soon as I start switching spaces. I just now found out about this, but my Macbook has been acting really slow lately and it might be linked to that. I will have to deactive warp for now, having only 1gb of memory, unfortunately. I'd be glad if you could release another version in the future though where this issue is fixed. Thank you for this little program, it's been fun using it! Yours sincerely, Seba